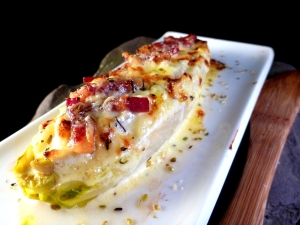 I haven’t eaten Endives in a good while. I wanted something different to the classic Endives with Roquefort. This came up. And it was good.

The song for today is Nantes from Beirut. A great american band I was lucky to see last year.

Wash the endives and remove the outer leave. Finely chop the onion. Cut the Iberico Ham in stripes.

Put a pot with water and salt. Bring to boil. Put the endives and boil for 7 minutes. Drain and let them cool down.

In a pan with a bit of olive oil, slowly fry the finely chopped onion until soft. Add the cream, a touch of ground nutmeg and black pepper. Let it reduce for 10-15 minutes at low heat. Stir occasionally. Add grated Parmesan and mix well. Season.

Cut the endives in halves. Put them in a baking tray. Cover them with the Parmesan cream. Add the Iberico ham stripes on top. Add a few drops of Extra Virgin Olive Oil. Top up with some grated Parmesan. Sprinkle some Oregano and Thyme.

Put on the oven top rack until golden.